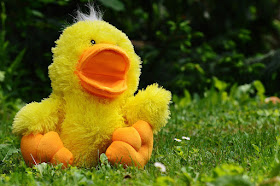 What a duck!
Like all my series, it may only last a week or two until I get distracted by something else. Though I do encounter my fair share of ducks in day to day life, so who knows maybe it'll be the start of something. It may be ducking awesome.
So lifts eh? Let's get started on how to be the perfect lift partner (if you are American, I am talking about elevators and trying to not be condescending when I say that) with lift etiquette, then maybe the world will be a happier place.

How To Queue For The Lift

Remember, you are British (if you are not, just humour me); the queuing system is sacred to your cultural roots. Here the normal rules of queuing apply:
I just had a flashback here of the lifts at Covent Garden tube station -you know the ones.
Possibly THE best place to see huffy-puffy British lift rage. If you haven't had the pleasure of this station's lift system, imagine taking a herd of wandering cows (tourists), interspersed with feral cats (Londoners) , then try to funnel them all into moving box. I'll just leave you with that.
By the way, do NOT take the stairs here, you will only spite yourself. Trust me I have tried the stairs here, where I found that I am very unfit and that I have a fear of heights. Of course take the stairs if there is a fire, I don't want you all jumping into a burning lift like lemmings.

What To Do When the Lift Doors Open

To summarise this point - HANG BACK!
Where's the fire guys? (It's not at Covent garden tube station, see above point)

Getting Into The Lift

Sometimes, just sometimes, not all of you can fit in (hopefully all of yourself, you should never have to lose a limb to fit into a lift).
Take this example:
The other day I got into one of those box sized lifts, just marginally bigger than the average hatchback's boot. The buggy was wall to door and I sucked my mum-tum in and slithered down the side.
Just then, "Room for one more?!!!" was hollered from behind me and a woman lift bombed (the lift equivalent of photobombing) in beside me. 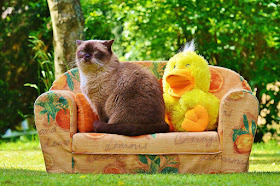 The cat/duck/sofa equivalent of lift bombing
My head said, "NOOOOOOOO!"
My mouth said....well it said nothing as it was practically making out with the wall, I was squashed in so far.
The lift went down one floor, she skipped off out of there. I uncrumpled my origami form and did an 11 point turn to get the buggy out.
In cases such as these, there is not room for one more. There are stairs for this instance.
Remember the laws of physics apply. A lift cannot be made bigger, just by someone squeezing their large derrière into it.

How To Close The Lift Doors

Now this is a key moment. The moment that may divide a nation. The moment when you decide to close the lift door.
Now I confess here, I can be a duck who swings both ways. If I'm feeling particularly ducky - it's been a long shopping day, the pre-schooler is demanding to sit in the buggy, the baby is refusing to sit in the buggy and I forgot the carrier bags so the buggy itself is about to give up being overstuffed with shopping - I may, just may, press the lift close button just as a lift bomber approaches.
If I'm having a karma moment and feeling like I need a lift buddy after being socially starved all week, then I'll press that door open button.
What do you do? Wait for that person painstakingly ambling over?
Do you pretend not to see them? Is the lift already packed and they can just take the stairs?
Do you take a little pleasure in those doors shutting?
Or do you hold the door open for every Tom, Duck and Harry while the lift emits a group tut?

How Operate The Lift

Assign your lift operator. This is usually the person nearest the buttons and the least distracted. 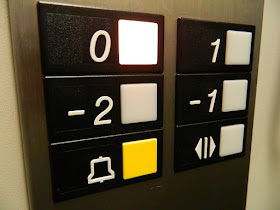 Bet you want to press the yellow one now﻿
Again I probably come across on the duck side here as I hesitate over the buttons, almost always failing to have scoped out what floor I want to be on... and then I bring a child into the lift...
DO NOT put a child next to the buttons. Your child's finger will automatically stick to the button with the big yellow bell on it and failing that, it will poke every floor you do not wish to frequent.
Other lift goers will smile through gritted teeth..."Isn't that sweet?" They say, willing the lift to spit you and your children out.

How To Be Social In The Lift

Basically don't. This is most peoples' 45 seconds of quiet contemplation.
There are some more don'ts:

Special Case: How to use a Hospital Lift

This deserves a special mention because it seems like roughly half of the population has no idea that a hospital lift is in, you've guessed it, a hospital. 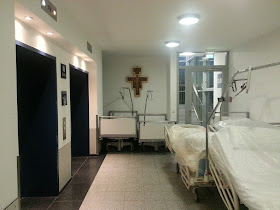 Here, the patient is king. So beds/patients/general emergencies take precedent.
I have been completely gobsmacked before when taking an incubator with a premature ventilated baby up in the lift and a member of the public peered over at the baby and muttered, "oooh that one looks small" and then proceeded to request which floor they would like.
That is an example of a complete lift duck.
Similarly, on the letters page of the local paper, a man was so outraged and sickened that he had to share the lift with...wait for it... a patient....who had a catheter bag...in full view. He felt so enraged that he felt the need to write a letter. What a duck.
If you too are sickened by er, sick people, in hospital lifts, I urge you to avoid hospitals. Place is full of 'em.

Who Can Use a Lift (in my Opinion) 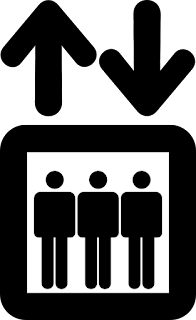 Despite the graphic, it's not only men than can use a lift
Now I don't want people to go all 'child and family car parking space' on me with this one, so I'm not going to go through the ins and outs of who should be 'alllowed' to use a lift...
If you're interested lifts are open to all.
BUT, if there are elderly/infirm/disabled/buggy users/small children with little legs/generally those who CANNOT actually take the stairs, then they do take precedent. It's not that you can't use the lift if you are fit and able (heck, I do love a lift, even without my kids in tow), but maybe just you, know, step back and try not to squish yourself into the lift if there is a bundle of these people waiting and if there is a viable stair option.
Just saying.
Totally in my opinion though *stands back from flame thrower*
******
Anyone else have ducking lift issues?
Feel free to spread the lift love by sharing, commenting, LOL'ing and then pressing all the lift buttons to make a perdy pattern in the total joy you feel at reading this.
I'm also on faceybook, Twitter and have just started with Instagram (documenting blurry photos at their best) - just click one of my social media icons. I promise you won't end up on some dodgy site.
*****